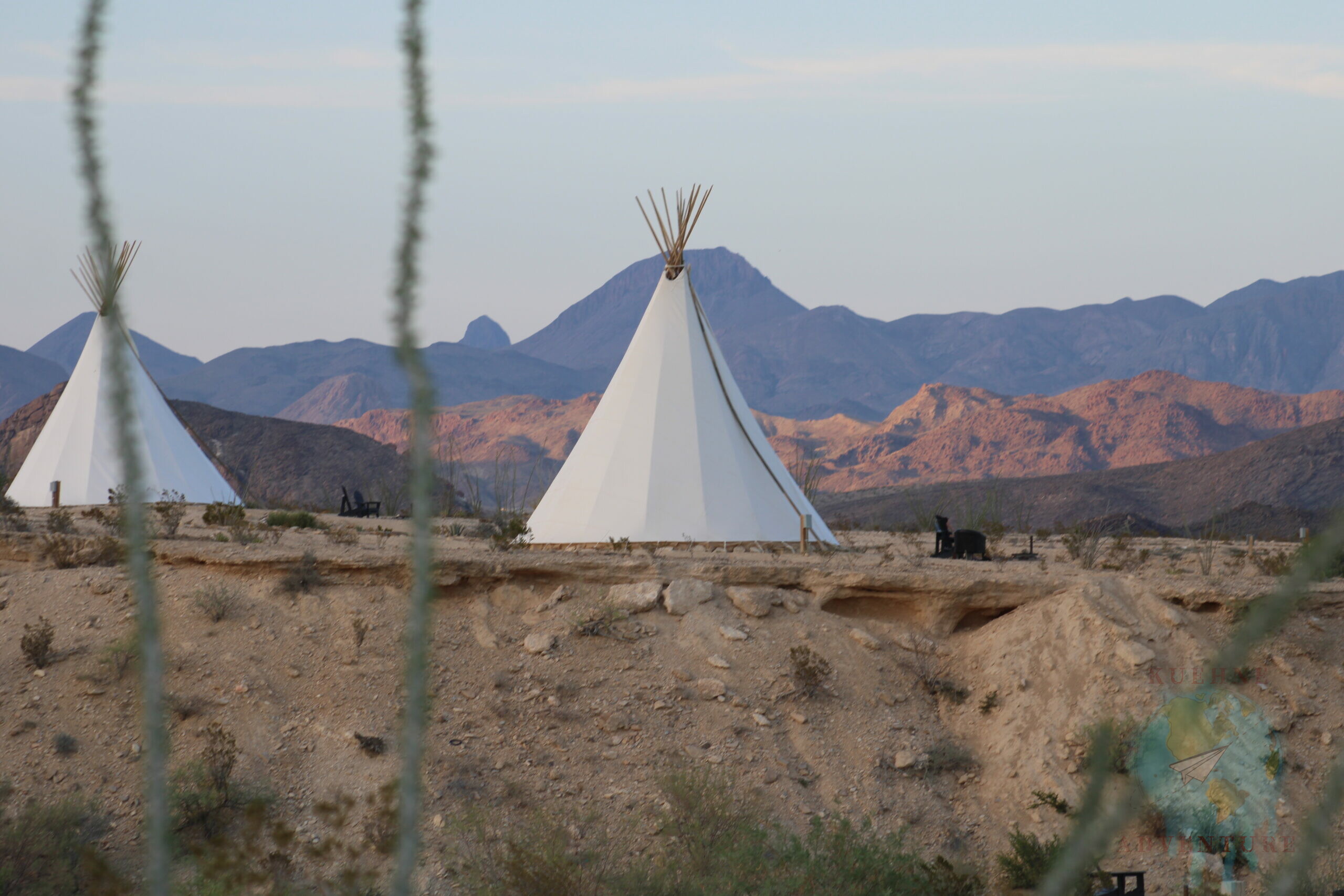 The past months were quite exhausting and, at times, nerve-wracking. The numerous appearances of Celina, the end-of-course tests, STAAR tests, and who knows for exams and the appointments with Edigo Photography had to be managed. On the work side, there were also some challenges. We needed a short (but intensive) break at the beginning of June to recharge the batteries for the following weeks. And when looking for a suitable location, the choice was unanimous and quasi-simultaneous at the Big Bend National Park. Well… we have already been there twice, but it is always exciting there. We have adapted our equipment (changing the wheel is no problem, an empty battery is no problem, and even dirty windows should not be a problem anymore). But also this time some surprises were waiting for us (and we hadn’t even arrived yet).

And on Thursday evening, we drove towards Sonora, where we took up our temporary quarters.

Friday started well, but we realized we were running low on gas at some point. So we looked for a gas station, which was one 20 miles from us (according to the Navi). Since our little car indicated that we could go another 30 miles, we figured that wouldn’t be a problem. Unfortunately, the 30 miles only applied downhill and uphill shortened the range to 5 miles. And of course, it was uphill…. The engine stopped about 8 miles from the gas station, and an incredible silence settled over the driving area. Something was mesmerizing about that, but the barren landscape around us did not promise a possible rescue. Yes, and of course, there was no telephone or Internet. Matthias let the car roll out in front of a vast water reservoir and informed the other two occupants of the situation, saying, “So that’s it … We’re out of gas!”. And now we knew what we had not thought of before…. a spare can of gasoline. Well then, the first vultures were already circling our car like in a movie, but we decided WE SURVIVE! So we stopped the next best Texan who appeared in our rear view mirror shortly after we rolled out. After some misunderstandings, he agreed to get us a can of gasoline from his house because of the language (he spoke only Spanish and we only German or English). So we waited patiently in the heat (hoping he would come back), and lo and behold… after about 30min, the excellent man was back; our car got 3 gallons of gasoline to drive together to the next gas station and fill up this time. (You can sweat even without heat, but at appropriate temperatures, it is easier).

With a full tank of gas, pumped-up tires, clean windows, and otherwise pretty dusty car, our further journey west led us to fantastic art and photo location: the lonely PRADA store near Marfa. It isn’t a store but an art project. It was built as a PRADA store in absolute nothingness and is deliberately left to decay and time as a symbol that even luxury is fleeting. So, of course, we had to use this location for some excellent fashion photos. What for we are here else!

On the way back, we stopped briefly at “Little Riata,” … a movie location from the 1956 James Dean movie “Giants” …. .maybe someone remembers.

Another 2 hours through no man’s land, we finally reached our beloved Terlingua, moved into our rented super cozy camper in the middle of the desert, and let the day end very relaxed…

Today we started the day first at the local gas station. No, this time not to refuel, but to get coffee… without which nothing goes finally, and the gas station has the best coffee far and wide (yes and also the only).
Because it is so beautiful in Ghost Town and currently there are hardly any tourists, we use the fantastic location for a small Steam Punk photo shoot. Celina has thrown herself in the morning at 35 ° C in costume and poses busy at old cars, in Jail, and the bar of the Starlight Theater. Then briefly, a few photos before the ruins and the town sign, and then we redeem the poor child…

Around noon we set off for a tour on the off-road track in Big Bend National Park through the desert. The driver had his fun there, and the fellow drivers would be shaken through.

The way led us to the breathtaking border river to Mexico – the incredible Rio Grande! We wanted to go surfing, diving, and paddling, but there was nothing. No water, just an almost dried-out riverbed where you couldn’t even get wet up to your calves, let alone build a mud castle. OK, some city kids (also from Austin) had fun playing in the last remaining mud to the delight of their parents.

We finally drove on and were suddenly “pursued” with blue light and siren and stopped. What have we done now??? How was it with police control again? All windows down, hands on the steering wheel, and friendly smile… The nice Border Patrol Officer / Park Ranger (yes, we are in the dangerous border area) asked for the Drivers License and disappeared a few minutes on the phone in his vehicle. Then he came back relaxed and pointed out that our brake light on the left side was not working. Phew… nothing dramatic then. We only got a warning, and don’t worry; we’ll fix it (if there’s ever the correct bulb somewhere)!

After this exciting experience, we chugged through the enchanting mountain scenery back to Terlingua to combine lunch and dinner at our favorite restaurant, “Chilli Pepper Cafe” (ok, it was already late afternoon), then set up our headquarters … moving and then… Change to 1hp at a time because, for the girls, we now had a 2-hour horseback ride into the breathtaking sunset! It was super lovely and soothing (even if tomorrow again, the buttocks will hurt…).

Matthias has, meanwhile, enjoyed peace at the camper and relaxed at the light and color change of the mountains. In the evening, we wanted to use to photograph the Milky Way, but since it was too bright, we switched thanks to the almost full moon to moon photos.

It’s Sunday… the “place,” and the streets are deserted, and thanks to the June heat (up to 45°C), it should be quieter and maybe a bit cooler in the mountains, too. So, off to the Chinos Mountains! We want to see if we can spot a bear or mountain lion somewhere! A lovely winding road leads into the Chisos Mountains Basin, a circular valley surrounded by rugged peaks. OK, this used to be a volcano. There is something like a natural forest here and many hiking trails. Still, we all don’t feel like a mountain hike with the hot temperatures, so we take a quick look at the landscape at the “Window,” buy ice cream, and then head towards Rio Grande Village to the official border crossing to Mexico.

Idyllic in the middle of nowhere, of course again only accessible via a gravel road, lies the cute little border post. From here, one could now cross the river with the “International Ferry” (actually only a small rowing boat), if…. yes, if a) there was water in the river (so you don’t have to cross on foot, and b) you hadn’t forgotten your passport, as in our case! Sure… Family Kuehne is, as always, super prepared! Well, we just look from a distance over to the only small Mexican village far and wide… save us the ride on the donkey there and mourn the fact that we can’t eat delicious chili. Ok, one more reason to come back!

On the way back, we stopped briefly at a dinosaur exhibition because the little animals were once entirely native here when everything was still swampland.

After another substantial meal at “Chilli’s,” we spent the evening moon and star gazing and, yes, at 40°C at the fire bowl grilling marshmallows at the request of a single young lady.

After three days of fun and many experiences, deep relaxation prevails again after the time in the desert. Naturally, we want to stay, but unfortunately, our employers (and especially our accounts) have something against it. So, with a heavy heart, we set off again on the 8-hour drive home, which is entirely free of mishaps and mishaps.
Bye-bye, Big Bend! We’ll be back soon – but next time WITH reserve canisters, WITH passports, and at new moon time for stargazing 😉